Birthday is the 30th episode of season 2, the 81st episode overall of Clarence.

Jeff and Sumo expect no one to show at Clarence's birthday party, just like last year, but when dozens of kids arrive, the boys struggle to get face time with Clarence, the popular party host.[1]

Episode begins with Clarence, Jeff and Sumo throwing food at a rock from their treehouse. When they run out of food to throw, Clarence decides it's time for his birthday party. As the three head to Clarence's house, Jeff rides a scooter and Sumo skateboards with Clarence running behind them. Clarence talks about all the childen he invited to his party. Jeff and Sumo thinks none of the kids are coming, but they tell him they're excited for the party.

In Clarence's yard, Mary and Chad are decorating for the party. Mary finds a box of Chad's old "Chozo the clown" stuff, and she suggests he performs for the party, but Chad doesn't really want to. When Clarence arrives, he sees the entire yard decorated with a brown theme, Clarence's favorite color. Seeing what they did, Clarence hugs Mary and Jeff praises her for her work. Mary asks Clarence if he wants to prepare the food. Clarence agrees to do it. When he opens the bag of chips, all of them fall on the ground. Sumo wants to eat, but Clarence does not allow it because they must make sure there's enough food for the guests. After Clarence runs off to help Chad with something, Jeff and Sumo mention that nobody comes to Clarence's birthday parties, so Jeff thinks it's a good idea to give Clarence his presents right away so he doesn't think about the guests.

Mary shows Clarence his wrapped-up present, Clarence tries to guess what it is, but Sumo spoils the surprise by saying it's a bike. Jeff tries to change the subject, so he tells Clarence that he can open the presents from him and Sumo. Clarence doesn't want to open anything until all his guests arrive, but he opens the present from Jeff anyway, and it's a pie. Suddenly, Vu shows up, and Clarence gets excited and starts showing him around the yard. Jeff is surprised that someone else actually showed up to the party, and Sumo shows off the present he got for Clarence; a bucket full of green slime. Vu thinks and it's disgusting, but Clarence loves it.

Suddenly, Chelsea and Kimby arrive, Clarence wipes the slime off his hand, and shows the girls where the chips are. In a matter of minutes, the yard is filled with children. Percy serves punch to the other guests while sitting in the bowl, and Clarence starts giving the guests party hats, however, they are not enough, so he gives the remaining guests a "party pat". Shortly after, Clarence shows Kimby and Fiari pictures of him as a baby. Suddenly, Sumo tries to throw slime at Clarence, but he misses, and the slime gets on Kimby's party dress. Kimby gets upset, and everyone stares at Sumo for what he did. At the table, Sumo tells Jeff that the party stinks, and Jeff agrees because they haven't had a chance to talk to Clarence all day, then Chelsea sits next to them and tastes Jeff's pie. Jeff gets mad and says the pie's not for her.

As Clarence tries to clean Kimby's dress, Jeff shows up and kicks Kimby out the way. Jeff tries to give Clarence a slice of pie, but Mary calls everyone to watch Clarence open his presents, and Jeff gets disappointed. Clarence shows everyone where to hide, then he goes inside the house and walks back into the yard, pretending he doesn't know about party, then everyone yells "Surprise!", and Clarence pretends to be surprised. Sumo and Jeff doesn't approve of Clarence's pretending. Clarence opens his present from Vu, which is just a bag, but Clarence likes it. Jeff and Sumo are upset about being last in line to give Clarence their presents. Later, Clarence opens his present from Gilben, which is a game called, "DING! DONG! DONKEY!". The kids start playing the game right away, and Clarence is the donkey. Jeff and Sumo cannot stand being at the party anymore and they leave.

After the childen sing a birthday song to Clarence, Mary reminds him about opening the present from her, so he starts opening it, which is the bike that Sumo was talking about earlier. Clarence gets really excited about the bike, and asks Jeff what he thinks of it, and that's when he realizes that Jeff and Sumo left. In the treehouse, Sumo and Jeff continue complaining about how Clarence paid more attention to the other guests and not them, so they decide to throw the presents they assume Clarence doesn't want out the window, but they have a hard time actually doing it. Meanwhile, Clarence leaves the party on his new bike to look for Jeff and Sumo. Percy asks everyone what to do, and Mary tells Chad to do his clown act.

As Clarence looks for Jeff and Sumo, he has a hard time steering his bike, so he causes things to fall over and a lot of passing branches hit him. At the treehouse, Jeff and Sumo are still having a hard time throwing away Clarence's presents. Suddenly, Clarence arrives, quite beaten up after his wild ride. Jeff and Sumo are surprised to see him there, and Clarence apologizes for not paying much attention to them. The three make up, and Clarence gives them a big hug. At the party, the kids are not impressed with Chad's performance, and Belson takes a bite of Clarence's cake, and the other kids notice. Meanwhile, Clarence, Jeff and Sumo had just finished playing, and Clarence remembers about his party. At the party, the other children are eating Clarence's cake, and when Clarence arrives, Dustin puts the two pieces of the cake together to make it look like no one ate it. Clarence requests his bike gets rewrapped so he can open it with Jeff and Sumo being there, and once again, Clarence pretends to be surprised. As Clarence shows the bike to Jeff and Sumo, he accidentally causes the bike to start rolling across the yard, the bike pushes Chad into the lit candles, and his suit catches on fire. Chad panics, but the children enjoy it, ending the episode.

The gallery for Birthday can be found here.

The transcript for Birthday can be found here. 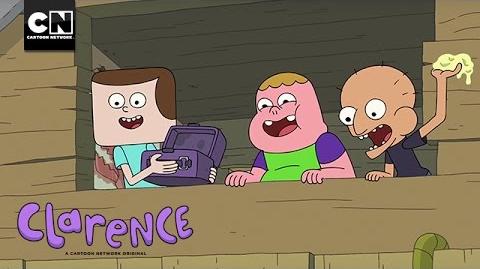 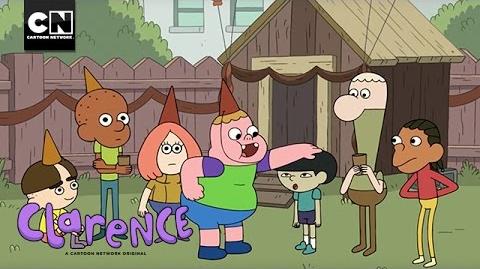 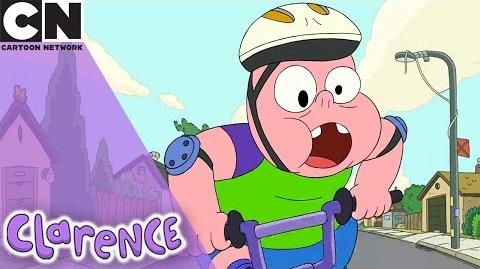