Belson Gets a Girlfriend

Belson Gets a Girlfriend is the 36th episode of Season 3, and the 126th episode overall of Clarence.

Clarence is in disbelief when he learns his best friend Belson has a new girlfriend named Pipi. But when he observes their less than romantic behavior, he decides that he needs to teach them the ways of love.

Belson and Pipi come down from the tree house followed by Clarence. This offends Belson, and Pipi believes he is great. However, both decide to follow the game and he helps them with their list of romantic things: They go to the movies, to Belson's house and to the Mall to eat cookies. Then they go to eat pizza and Clarence tells them to eat the same portion at the same time, as part of a romantic dinner. Meanwhile, Jeff tries to tell all his classmates that Belson and Pipi are boyfriends. Clarence wants to go buy jewelry but they take it out, then he thinks of taking a toy ring from a bulk vending machine.

Clarence hides in a plant and gives the ring to Belson to ask Pipi for marriage, but she takes it as another of her jokes and puts the ring in the tail of a dog, anyway, Belson laughs that. Belson gets nervous and runs away from Pipi, meeting again with Clarence. Clarence dresses Belson extravagantly, so he can ask Pipi again. Jeff is asking for ice cream and tries to talk to Pipi, but she leaves. Belson meets Pipi and reads a poem, followed by another declaration of love. Pipi laughs at that again and Belson gets angry and goes to the gym, also followed by Clarence. Belson gets on the treadmill but Clarence quickly convinces him to follow Pipi.

Pipi gets on Gale's train and Belson follows her to get on with her. To help, Clarence throws himself in front of the train to stop him, Pipi gets off and she and Belson hold hands. Then, security takes Clarence out of the place. Jeff talks to some old women interested in love that Mavis loves Dustin , but they respond that they already knew because someone told them. At that moment Kimby passes Jeff's side and kneels on the ground, with a kind of background explosion. 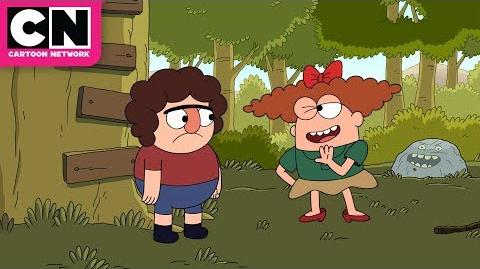 Retrieved from "https://clarence.fandom.com/wiki/Belson_Gets_a_Girlfriend?oldid=90918"
Community content is available under CC-BY-SA unless otherwise noted.