Balance is the 50th episode in Season 1 of Clarence.[1]

Ms. Baker introduces a new student, a short little kid with a hook for a hand named Balance.

Clarence is pumped to have a new friend, despite Balance’s gruff attitude and snarky jibes at the other kids. When Clarence discovers a disturbing secret about Balance, he and Belson team up to expose him for who he truly is.[2]

Episode begins at school where Ms. Baker announces that they have a new student in class. The new student steps out of his seat and stands next to Ms. Baker to introduce himself. He says he's called Balance, and he tells the class some things they don't understand. He also flirts with Ms. Baker, then he reveals his hook hand which scares the class.

Soon, Balance begins walking back to his seat, and everyone stares at him, with Clarence being the only one smiling and waving at him.

Later in the hall, Balance hits his hook hand on the lockers before meeting Clarence. Clarence is excited to talk to him, and mentions how cool it was when everyone freaked out about his hook hand. Clarence also introduces himself and shows Balance some rocks, then he asks Balance if he wants to sit with him during lunch, but Balance's response is completely unrelated; he wonders if Clarence has been telling people that he looks like him. Clarence doesn't understand Balance's question, so Balance pulls on Clarence's shirt with his hook hand and asks the question again. Balance doesn't give Clarence time to explain himself, then Balance tells him not to stick his nose where it doesn't belong, and he makes the pile of rocks fall out of Clarence's locker.

In the cafeteria, Balance gets his lunch, and Clarence talks to Jeff about how cool Balance is. Jeff feels like something's not right about Balance and that they shouldn't talk to him, but Clarence decides to talk to Balance anyway. Clarence asks once again if Balance wants to sit with him. Balance isn't happy to see Clarence again, but he decides to sit with him just get more food. Clarence takes Balance to a table where Belson, Nathan, Mavis and Gilben are. Clarence introduces Balance to them, but wonders why people call him Balance, so Balance takes Mavis' spoon and balances on it. Nathan and Mavis applauds him, but then Balance suddenly begins bullying everyone at the table.

Belson is not scared of him, but Balance does break his gaming console, and that's when Clarence realizes that Balance is not cool, so he announces that it's time to speak up and tell an adult. At that very moment, Ms. Baker shows up to tell Balance that he hasn't been vaccinated yet, so she takes him to the nurse's office. Clarence tries to tell Ms. Baker what Balance did, but she says it's not a good time, and as Ms. Baker walks Balance to the nurse's office, Balance looks back at Clarence with a sneaky smile.

Clarence tells Belson that they have to catch Balance in the act to show how much of a bully he is, then the scene cuts to Belson in the hall with a tape recorder and microphone under his shirt. He starts talking to Balance, who is also in the hallway, and tries to get him to say something mean,

but Balance notices the microphone under Belson's shirt and gets mad at him and knocks him down, then Clarence jumps in and the three start fighting. At that moment, Mr. Reese shows up and breaks the fight. Clarence and Belson tells Mr. Reese that Balance was being mean, and that they got it all on tape. Mr. Reese tells Balance to hand over the tape recorder, and Balance does so, but when Mr. Reese plays the tape, it's just a recording of Balance singing a song, to which Mr. Reese tells him he's doing a good job, and leaves. Balance reveals that he tricked them and switched the tapes, and this makes Belson want to give up, but Clarence does not want to. The scene cuts to the classroom where Clarence sees Balance craving an apple into the shape of Belson's head and cutting it with his hook hand. This makes Belson and Clarence nervous. Balance asks Ms. Baker if he can go to the restroom, and Ms. Baker allows it.

Clarence follows Balance to the restroom, and when we opens the door, he sees Balance shaving his beard, and yells all the way to the teachers' lounge, but somehow, Balance has already beaten Clarence there, and he's standing on the table telling jokes to the teachers. Ms. Shoop tells Clarence that he's not allowed in the teachers' lounge, but Balance says Clarence can stay because he's just in time for "the show". Balance tells Mr. Reese to hand him a tiny cream cup, and he balances on it. He also tells Reese to try and make him fall by moving his hand under his foot, and Balance jumps up and avoids falling down every time. The teachers are amazed, and Clarence asks how is Balance doing that.

Balance responds using his mind, telling Clarence that he can make him think whatever he wants, he also tells Clarence other things using his mind, all while making Clarence's eyes swirly. Suddenly, a circus ringmaster shows up and gets mad at Balance for leaving the circus and getting in peoples' minds. Balance resists going back to the circus because the school has green beans and beautiful women, but then the ringmaster shows him a contract that he signed with the hand that the hook is on, and he shows that Balance still has that hand. The teachers are in shock, then the ringmaster calls his other performers, Chumo and Beff to get Balance. Balance tries to escape by jumping out the room, but he crashes into the lockers, and soon gets thrown behind bars in the back of the circus cart. The ringmaster apologizes for the trouble, and hands the teachers tickets for the next time their circus is in town. The ringmaster and the performers drive away on their circus cart, but the circus cart ends up falling over, and Balance's cage opens, setting him free, then Ms. Baker tells everyone to get inside, ending the episode. 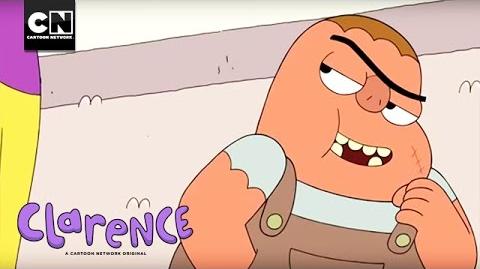 The New Student I Clarence I Cartoon Network 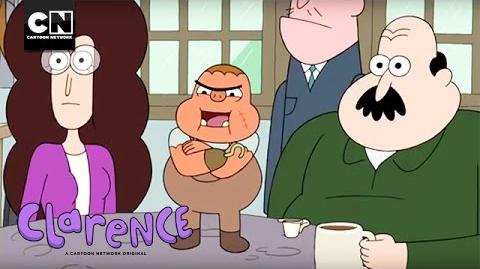 Up to No Good I Clarence I Cartoon Network

Retrieved from "https://clarence.fandom.com/wiki/Balance?oldid=92376"
Community content is available under CC-BY-SA unless otherwise noted.