Anywhere But Sumo is the 40th and final episode of Season 3, and the 130th episode overall of Clarence. It is also the series finale of Clarence.

When Clarence realizes that Sumo has made new friends at his new school, he is confused and jealous. Will Clarence in the end accept a school life without Sumo or find a way to continue their friendship?

On the few days leading up to summer break, Sumo and Clarence's hair cut anniversary (the day Clarence cut Sumo's hair from the pilot) is mentioned, Sumo agrees to let Clarence cut his hair, but on the day of their anniversary when Sumo's friends from his school cut his hair, Clarence gets betrayed and jealous by this, and finds out that Sumo may be starting to hang out with his friends more than him. However, with his many attempts to get with Sumo more, they all fail, and Clarence starts to get left out.

Because Clarence believes summer is a "squillion miles away", he gets sad that he might not be able to spend more time with Sumo until summer, which Jeff reveals starts tomorrow. Clarence, happy by this, races to the couch they made their own earlier named Clarmaland and Clarence cuts Sumo's last hair that his friends missed. They all get together and watch in shock as Sumo's school is destroyed by a runaway bulldozer from "Sumo Goes West" and cheer because Sumo and his friends no longer need to attend school. As the wall falls apart, Ms. Baker and Mr. Mozer were inside kissing. When Clarence saw them, he exclaims "Yes!" and the words "Thank you for watching" appear around him, ending the series. 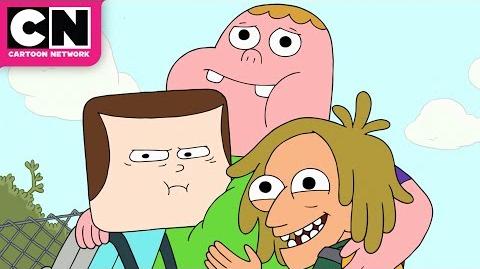 Retrieved from "https://clarence.fandom.com/wiki/Anywhere_But_Sumo?oldid=93180"
Community content is available under CC-BY-SA unless otherwise noted.