Aberdale is a fictional setting in Clarence. It is where Clarence, Jeff, Sumo, and the rest of the characters live.

Aberdale is a large semi-suburban city that is known for its run down buildings and major tourist draw, Squirty's Moist Mountain Water Park, however, it is located outside of the area nearby the desert. 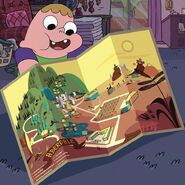 Add a photo to this gallery

Retrieved from "https://clarence.fandom.com/wiki/Aberdale?oldid=68179"
Community content is available under CC-BY-SA unless otherwise noted.