A Sumoful Mind is the 28th episode of Season 3, and the 118th episode overall of Clarence.

When Jeff realizes Sumo's new classes have been rubbing off on Sumo, he attempts to further foster this newfound intellectual Sumo! But will Clarence's lowbrow antics reverse Jeff's hard work?

The episode begins with Clarence and Jeff waiting for Sumo, meanwhile, Clarence does nonsense. Upon leaving, Jeff reads the theme book from Aberdale West Elementary School and then goes to the Tree House. There, Clarence and Sumo clean the garbage rock while Jeff plays a board game alone. By chance, when Sumo enters to look for water, he realizes that he had played before the said board game. Both play for a long time until Clarence realizes that Sumo left and goes up to the tree house to alter the rules of the game, Sumo plays along and they start to invent things more and more crazy, then they both leave, leaving Jeff angry.

The next day in classes, children must do an activity with bars, Ms. Baker teaches how to use them, although Jeff is the only one interested. Suddenly a rat enters the room, disturbing Jeff, and it is shown that Mr. Reese plays the flute for many rats to follow him. Percy leaves the room to follow the rats and shows an aerial view of the uncontrolled room, while Jeff is very angry. After classes, Sumo meets Jeff in the square and they eat a burrito, then both dance holding hands around the statue. In the next shot, Jeff and Sumo play "Meeting of the Sorcerers" in the tree house, but Clarence enters with many nuts and Sumo follows him, leaving only Jeff.

Next, Jeff and Sumo watch a moving program, even making Sumo cry, but Clarence puts a program where a man just sits in his chair, so Sumo stops crying and laughs. After that Jeff and Sumo go to an aquarium with Clarence, but the latter sees Belson with Pipi and follows them, leaving Jeff and Sumo alone. In the aquarium store, Jeff discovers that Sumo is crazy when he is with Clarence, while he is more intellectual when he is without him. Then you see a dream of Jeff, in which he, Sumo and his companions are adults and are in the cafeteria, Sumo and Jeff talk to each other until Clarence arrives making gas sounds and Jeff wakes up.

After everything that happened, Jeff takes Sumo to the tree house, which is decorated with the theme of the board game they have been playing. Both begin to play until Clarence arrives, then he and Sumo stand and jump on the table, but break it by the weight. Jeff gets angry to the point that decides to destroy everything he built, but both end laughing. Next, you see the trio playing outside the tree house to a version of the game in real life. Clarence stops playing and realizes that he accidentally swallowed a nut.

It end ups as dare day just like straight illin.

The gallery for A Sumoful Mind can be found here.

The transcript for A Sumoful Mind can be found here. 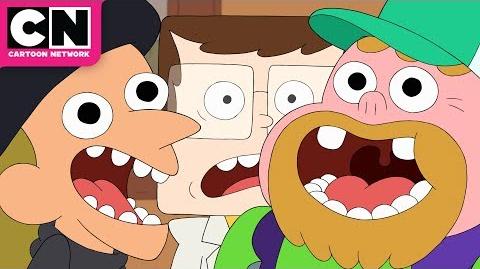 Retrieved from "https://clarence.fandom.com/wiki/A_Sumoful_Mind?oldid=91195"
Community content is available under CC-BY-SA unless otherwise noted.